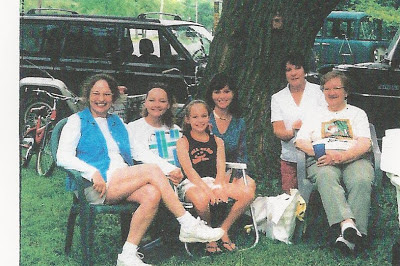 Joanna Belle Harkness Cartledge of Middle Bass Island, Ohio, born May 26, 1922, died on Monday, January 28, 2013. She was the daughter of the late Charles and Lilian (Brown) Harkness of Vestaburg, PA, and Detroit, MI. She was proceeded in death by her husband of 69 years, Douglas Cartledge, and her older daughter, Amy May Thomas Reidling.

As part of the war effort in the 1940s, Mrs.Cartledge built Pratt and Whitney engines. In 1941she graduated from the Del-Mar School of Cosmetology.  With her husband she owned several island businesses, including the Erie Island Mirror, Doug’s Ice Fishing, the fishing boat “Way Ahead,” and Island Pottery.  Her final business, Belle’s Dolls, received national and international recognition for a series of 43 U. S. President and First Lady dolls, which she sculpted in porcelain and costumed authentically.  She was a member of the International Association of Doll Artists. For five decades, she served as an election poll worker, and in the 1990s she was recognized by the State of Ohio for voting in every election for fifty years.

Mrs. Cartledge is survived by two sons and her surviving daughter, 8 grandchildren; and 10 great-grandchildren.

Memorial tributes may be made to your local chapter of the Salvation Army (which Mother honored because of the vital services she saw them offering to the destitute during the Depression) or to the Middle Bass Fire and EMS Department, 455 Fox Road, Middle Bass, Ohio, 43446.
Posted by Unknown at 4:30 AM

I'm just amazed at how young your mother looks. And this gang of women just shines like a newly-polished bell. Beautiful!

I think it's pretty cool that she did cosmetology in school then went out and started/ran one business after another, including handcrafting presidential dolls! What an astonishing legacy.

I know you miss her dreadfully. And I'm so glad she gave you to the world.

Thank you, Lisa. Her curiosity and delight in the world were amazing. And we are, indeed, a pretty cute little bunch, aren't we?

I was diagnosed of Herpes 2 years ago and I have tried all possible means to get the cure but all to no avail, until I saw a post in a health forum about a Herbal Doctor(Dr Akhigbe) who prepares herbal medicine to cure all kind of diseases including Herpes, at first i doubted, if it was real but decided to give him a trial, when I contacted Dr Akhigbe through his Email: drrealakhigbe@gmail.com he guided me and prepared a herbal medicine and sent it to me via courier Delivery service,when I received the package (herbal medicine) He gave me instructions on how to consume it,I started using it as instructed and I stopped getting outbreaks and the sores started vanishing, could you believe I was cured of this deadly virus within two to three weeks and notices changes in my body. Days of using this REMEDY,couldn't believe the healing at first until I see it as my HERPES  get cleared like magic Dr Akhigbe also use his herbal medicine to cure diseases like, HIV, HERPES, CANCER, ALS, CHRONIC DISEASE, COMMON COLD, HEART DISEASE, LUPUS, ASTHMA,  LEUKEMIA, DIABETES,  HEPATITIS A AND B.ECZEMA, BACK PAIN, EXTERNAL INFECTION ,ASTHMA, EPILEPSY,STROKE,KIDNEY DISEASE,ACME. PARKINSON'S DISEASE etc Contact this great herbal Doctor today the father of herbal root cure. via Email: drrealakhigbe@gmail.com or whatsapp him +2348142454860 and get cured permanently He is real..website:      https:drrealakhigbe.weebly.com