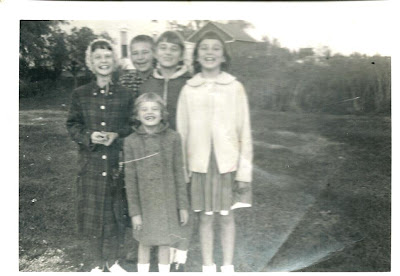 Ha!  Here we are, the total school population of Middle Bass Island Grade School, circa spring 1960.

Karen and Douglas were in seventh grade; Amy was in sixth; I was in fifth. Carolyn has the grin of a child whose front teeth just came in, so she's either in first or second grade.  We were the core island scholars for several years. The only children younger than I were Carolyn and her siblings.

Regarding the building in the background, I rather think it's Walt and Izzy Swisher's home/store, although the style of the windows makes me wonder.  Perhaps it's Frank Roesch's house, which was also white with tall windows and buildings in the back.  Why were we there?  The answer is lost in memory, as is the answer to the question of how my mother, who was fastidious about the way her children dressed, let me out of the house with my petticoat showing. We aren't wearing the white gloves that were de rigeur for field trips.  However, you'll notice that bangs were a happening fashion statement that year.
Posted by Unknown at 2:31 PM