Stylin' and Profilin' with Old McDonald 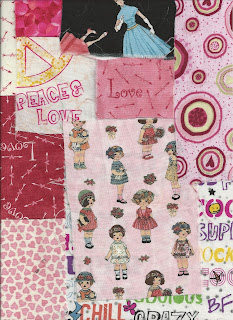 Here are some of the fabrics for  the new picnic blanket (a. k. a. pieced quilt) I started this week for a friend.

I was zooming along with the construction when my compadre asked if I'd seen the friend's latest post on facebook. Turns out she'd told her daughter's adoring public about all of the animal sounds the toddler can make now.

My compadre contained himself until the next morning, and then he couldn't stand it any longer. He said, "You ought to put the animals on the quilt."

The what?  Yes, I'd heard correctly. He thought I should put all of the animals the little girl knows onto her mom's quilt.

"They'll look really good," he said.  He didn't need to add that my friend would be doubly delighted.

As an act of friendship, he was bang-on right.  From a design perspective, though, I had to rearrange my idea of what I was making.  See those pretty fabrics above?  The one with the black background shows up in a number of places on the quilt, as does another fabric with a black background.  The motifs for that one are fabulously outlandish boots and purses. It's a styling and profiling quilt balanced by a range of pinks and a few very small rectangles that reflect the presence of a little girl.

Adding animals?  How would that work?  More smoothly than you might think, considering the fabrics I added: 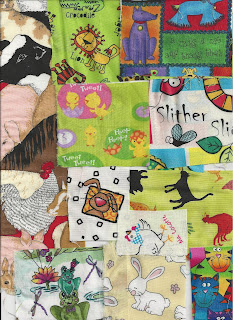 Believe it or not, I had all of these fabrics except the lion (green background, top center) and the snake (Slither slither on the right side, with the white background).

The majority of the piecing was complete, but I was able to substitute good-sized chunks of animal fabric here and there.  The rest of them I fused down slap in the middle of my carefully chosen and organized pinks and peace signs, alleviating the potential boredom that never existed because it was wonderful to begin with.

And now?  What is it now?  I'll post a photo when I get the thing completely finished so you can judge for yourself, but I've got to say that sometimes dumping your original concept when a new one comes along can be a brilliant move.  Already I love thinking about how much fun my friend will have with her daughter, the two of them discovering animals here and there and giggling as they baaa and moooo and ssssss and oo oo ah ah (that's a monkey sound) and ribbit and roar with their blankie wrapped around them.
Posted by Unknown at 11:21 PM

Thanks, Ann! We're delivering the finished blankie today, so I'll have some photos to post tomorrow, if not earlier.