The Art of Driving Smart 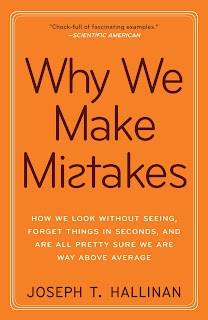 I'm reading Why We Make Mistakes by Joseph T. Hallinan and keep tripping over information that I knew was right that's actually wrong. For instance, do you remember being told that when you take a test you're supposed to stick with your first answer because it's more likely to be correct than your second choice?  Well, it turns out to be wrong.  Go ahead and change the answer, and you'll probably get a better grade.

Of more critical importance is the information about driving.  If you ask drivers if an accident occurred because they were distracted at the wheel, they'll say yes about 25% of the time. If you put cameras in cars, though, you'll find that answer is a gross understatement.  Actually, according to a researcher for the National Highway Traffic Safety Administration, "'in about 78 percent of all crashes and 65 percent of near crashes, the drivers were either looking away or engaging in some secondary task."

Our cars are full of secondary tasks, most of them involving cell phones and GPS devices or, in my case, the GPS system on my cell phone. Between the need for information and the need for conversation, our streets, thoroughfares, interstates, and, for that matter, sidewalks, are far more dangerous than they were ten years ago.

We've all sat at a light and muttered at the driver ahead of us, "Hang up your stupid cell phone; the light's green," but it turns out the problem is more than just a minor annoyance.  78 percent?  That's crazy.  Maybe we should stop that foolishness now, before we kill somebody.
Posted by Unknown at 11:33 PM